The famed stock contracting firm from Elk City, Oklahoma, is the third generation of Beutlers to be in the stock contracting business.  Bennie and his son, Rhett, make up the Beutler and Son Rodeo Company, which provides bucking horses and bulls to premier rodeos across the nation, including Nebraska’s Big Rodeo.  The Beutler family is a tradition at this rodeo and have been making the trip to Burwell since the 1940’s.  The company has had animals selected to buck at the Wrangler National Finals Rodeo nearly every year in its six decades of existence.

The Beutler name has been part of professional rodeo for decades, from the onset of Beutler Brothers Rodeo Co. to collaboration of Beutler & Son Rodeo Company. Bennie Beutler and son Rhett have joined together to carry on the family business that began in 1929 when brothers Elra, Jake, and Lynn Beutler began providing stock to rodeos. Jake and Lynn kept the sibling business running in a similar form, but Elra eventually teamed with son Jiggs to form the original Beutler & Son. Bennie worked with his father, Jiggs and grandfather in the family business. After his elders’ deaths in the 1980’s, Bennie joined forces with E.K. Gaylord II to form Beutler & Gaylord Rodeo Company. That partnership continued for a dozen years, having won the PRCA’s stock contractor of the year title in 1997 and having numerous horses and bulls named roughstock animals of the year.

Bennie has now served as assistant general manager of the National Finals Rodeo (NFR) since 1982, as NFR chute boss (1979-1980), as a member of the PRCA Rules Committee (1980), stock contractor representative on the NFR committee (1981-1982), as a member of the PRCA board of directors (1989-1991), and as stock contractor director on the PRCA board until 2004. He was PRCA Stock Contractor of the year in 1997.  He was inducted into the Pro Rodeo Hall of Fame in Colorado Springs, Colorado in July of 2010. Bennie goes into the Hall of Fame, following his uncle Lynn Beutler, who was inducted in 1979. Bennie is married to his wife Connie and they have three children, Rhett, Amber, and Katie.

Rhett runs the everyday operations for the company and serves as co-owner with his dad. He lines up all the specifics for each rodeo that their animal athletes travel to and gets everything in the right place for showtime. During the rodeo you will find Rhett behind the chutes as flankman. He and his wife, Tracy, have two children, Taylor and Jake, who already get in on the action and give the business a promising future. 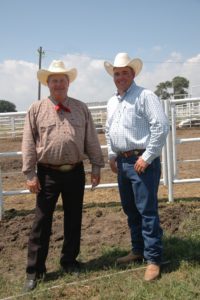